Despite the name, French's is an American brand of condiments, sauces, and other food items. They're probably most well known for their mustard though! The brand was originally created by Robert Timothy French, over 100 years ago! Their mustard was first debuted at the St. Louis World's Fair in 1904. It took less than 20 years for them to create the logo we know and love today and start advertising to the general public! Since then, they have become a household name across not only America but the rest of the world! They do more than just mustard, however! (Although their mustard is some of the best around!). You can also find ketchup, crispy fried veggies, Worcestershire sauce and seasonings in their list of tasty products! So, what are you waiting for? Grab a bottle or two of French's and make your next meal taste great! 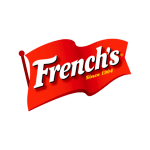