We understand mornings can be a very busy time for some of us, but a cup of coffee is a must! To make it convenient, Folger’s is here with its Classic Roast Instant Coffee. A cup of this fresh coffee will wake you up allowing you to take on the day! Also Enjoy at work during your breaks to keep you going!

Folgers coffee has been the largest selling brand of ground coffee in the US since the 90's. How cool is that?! The history of the brand begins with James Folger in San Francisco. Despite many events that could have knocked him down, he fought hard to build a business. Initially, he worked for The Pioneer Steam Coffee and Spice Mills. He worked his way up before becoming a partner, however after the Civil War the company became bankrupt. That didn't stop him though. Instead, he got the company's debts paid off, and bought out all the other partners. Then, he renamed the company J.A. Folger & Co. James Folger passed away in 1889, but his son carried on the business, and the company continued to grow. They survived plenty more events, including the Great San Francisco Earthquake of 1906, and even World War 2! Today, Folgers is still going strong, and they do a huge selection of delicious coffee that is loved by America and the world! 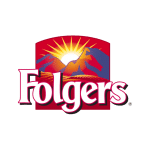 £14.25
Add to basket
Compare
Wishlist
Back to Top